With all the fabulous digital stamps at Sweet 'n Sassy Stamps, I always have such a hard time deciding which digi I should play with. After a great 'cyber' discussion among the design team, discussing gnomes and the memories they conjure up, I decided to create a card with Korin's Nathaniel Gnome.

Nathaniel was suggested by Chris Sather for the Digi Designer Contest. Isn't that awesome to see a stamp that you thought of? 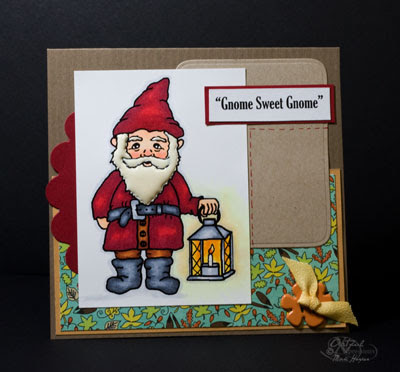 He's colored with Copics and for his beard I became daring using Liquid Applique. It's my first time using this medium and I am not quite sure if I like it. His beard is too smooth. I'll just have to try it again, right?

Now when I think of gnomes, I think forest, nature, woodsy type colors which is why I chose earth tones for my card stock and panels. I added the red card stock pieces to tie the color of his jacket and hat in with the card. Having said all that, Nathaniel is printed onto Neenah Solar White super smooth card stock which I generally would not have paired with earth tone colors. This time I thought the white gave it a nice 'pop'. I love white space :-).

The sentiment is from Gnome Sentiments. These are just two of several great digital stamps which were released this week at the shop. And if you don't see a digi stamp that you are looking for or think of one that would make a great digital stamp, enter your suggestion in the Digi Designer Contest. Hurry though, this contest ends March 19th! Wouldn't it be so exciting to see your name at Sweet 'n Sassy Stamps? I think so :-)

Thank you guys so much and have a wonderful Friday!

DT Creations:
You are more than welcome to copy the artwork we share with you on this blog, however please do not copy anything for publication or contest submissions. Let's play fair and keep blogging fun. Thank you!

Participant Creations:
We reserve the right to remove any links we feel do not represent wholesome, family friendly attitudes and themes. Thank you for understanding.